Two reviews of the 2016 January Festival in the Hereford Times:

A preview of our January 2016 Festival in Classical Music‘s winter festival round-up: 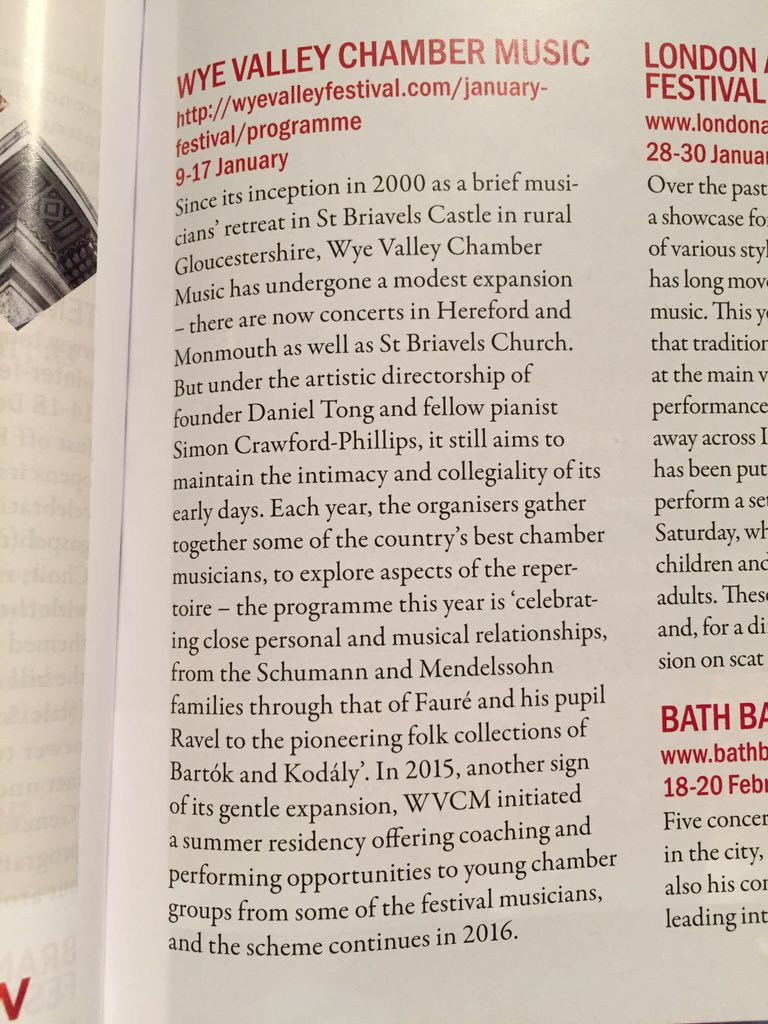 Music for a Summer’s Day. A review in the Hereford Times of the concert on 14th June 2014 in Homs Church as part of Music in June.

Winter Journey on the River Wye. An article by Stephen Walsh for The Arts Desk, 4th January 2012.

Review by Fiona Maddocks in the Observer of the St Briavels concert in January 2012.

“Some performers help finances along by charging no fee for their virtuoso services, but the circumstance has to be exceptional. The quixotic Wye Valley chamber music festival, now in its 13th year, is just that. Whereas unpaid summer collaborations between musicians are not unheard of – the International Musicians Seminar Prussia Cove is a prototype – you have to be made of sterner stuff to hole up in a chilly castle perched high above the Wye in the Forest of Dean, in midwinter, purely to play chamber music.

Founded at St Briavels in 2000 by pianist Daniel Tong with friends such as fellow pianist Simon Crawford-Phillips and violinist Matthew Truscott, the festival began in heroic but melodious discomfort. The village’s medieval castle and church remain key venues but now the musicians sleep, eat and rehearse in the warmer environ of nearby Treowen Manor. This year’s five days of concerts and workshops, held in venues around Hereford and Monmouth over two weekends, attracted a couple of dozen brilliant young players and included an Elgar day concentrating on the late chamber works.

“Top musicians to provide a classical treat in valley”
by Owen Adams, The Forester, January 6 2011